A (brief) glossary of genetics

A summary of the genetics of ACDMPV

It is now well established that ACDMPV is a genetic disease. This means that ACDMPV occurs due to abnormalities in the DNA. Humans carry DNA in all of our cells that make us up and it acts as the blueprint to make us who we are. However, this doesn’t mean that ACDMPV is familial in most cases. In almost all cases the genetic abnormalities (mutations and deletions) that are found in infants with ACDMPV are not present in either of their parents and thus the risk of other children being affected by ACDMPV is low.

The genetics of ACDMPV are complex and require the use of some genetic terms. Please see the glossary above for an explanation of some of these.

Based on the cases described so far, the FOXF1 gene seems to be subject to paternal imprinting. The FOXF1 gene that an infant inherits from his/her father is inactive and not expressed, thus all cases of ACDMPV arise by the genetic abnormalities arising on the chromosome inherited from an infant’s mother. In approximately 90% of cases of ACDMPV where a genetic abnormality has been found it appears to have arisen de novo and is not familial. The abnormality arises in the mother’s ovary early in her life, often before she was born.

Four families with more than one child affected by ACDMPV have been described in research conducted at the Baylor College of Medicine so far. There might not be a family history of ACDMPV as a result of paternal imprinting. This means that the genetic abnormality only results in ACDMPV when it is inherited from an infant’s mother. In three of these families, there was a mutation in FOXF1 found in the mother’s blood sample. One case of ACDMPV due to gonadal mosaicism has been described.

The best way to detect genetic abnormalities is using a blood sample from an infant. If this is not possible, DNA can also be extracted from tissue, for example a lung biopsy or autopsy (post mortem). It is important to test such material for the following:

If an infant has a genetic abnormality detected, this can be used to test future siblings when the mother is pregnant (or after birth) to look for ACDMPV if so desired. DNA can be taken from the fetus when in the womb by one of two procedures known as chorionic villus sampling and amniocentesis. This test is offered by the clinical diagnostic laboratories at Baylor College of Medicine.

A blood sample for genetic testing can be collected prior to or after an infant is placed on ECMO as the donor blood used for ECMO is depleted of the white blood cells that are used in genetic testing before it is given to the infant and therefore there is no chance of contamination. 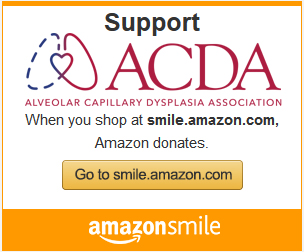